As the MCU rolls into its 19th film, the franchise has gotten to the point where it is able to do one of the things that made Marvel Comics so successful when they first debuted in the 1960s.  You have a feeling that any character can now show up in any movie at any time, and having built strong characters with deep foundations, you can have a ton of fun playing with new combinations.  The third Thor film does this with both the Hulk and Doctor Strange (mostly Hulk), and even though I loved the first two Thor films a lot more than most, there’s not doubt that Ragnarok is the strongest of the three had the most impact on the overall MCU.

Planet Hulk is a storyline that fans have been clamoring for a film adaptation of for years, but Disney and Universal are bogged down in a lawsuit as to who actually owns the rights to make solo Hulk films.  So Disney just went ahead and backdoored Planet Hulk into a Thor film.  Watching the two most powerful Avengers have a knockdown drag-out fight is epic, and I’ve always been a fan of Gladiator Hulk.  Both in the fight and in the almost-as-awesome sequence with Doctor Strange, you really have to admire Chris Hemsworth’s groove with Thor.  The character was always the most troublesome of the original group to solo (he has a magic hammer, wears a winged helmet, speaks like a Shakespearean character, and lives in a magic realm with rainbow bridge….it wasn’t irrational to be worried).  Hemsworth has managed to make the character noble and increasingly mature but also infuse him with a comedic goofiness about his self-importance and in his relationships with the other Avengers, that I can’t imagine anyone else being able to pull off.

Who knows what will happen to Thor over Avengers 3 and 4, but I’m hoping King Thor gets a chance to relocate Asgard when all is said and done on the other side.  I think there are still more stories to tell with the character now that Ragnarok completely changed his entire character and supporting cast.

What began in 2008 with Iron Man will begin to come to a close in 2018 with the release of Avengers: Infinity War.  The first of a two-part finale to an unprecedented 22-movie story arc spanning the Marvel Universe, the film will unite essentially the entire MCU in a fight against the Mad Titan Thanos.  Heroes will die.  Stories will end.  It’s no small coincidence that this trailer is dropping as Black Panther’s run at #1 begins to come to a close.  Marvel is clearly trying to keep the momentum of its unexpected phenomenon going, and has moved up the release date of Avengers: Infinity War one week, so that we’re only six weeks out from the BIGGEST film of the year.  This trailer is very Thanos-centric, fully introducing the threat first seen at the end of The Avengers six years ago.  Avengers: Infinity War will open April 27, 2018.

Idris Elba is an actor whose career has been equally divided between defining roles on both the big and small screens.  A career television actor, Elba broke out in HBO’s The Wire as Stringer Bell and has continued to create and expand one of TV’s best charactes in DCI John Luther for the BBC.  Joining the Marvel Cinematic Universe as Asgard’s gatekeeper, Heimdall, gave Elba feature film exposure that has caused the actor’s star to continue to rise.  Elba has probably had the best two years of his career over the last two using both his live-action talents in Beasts of No Nation and Molly’s Game as well as the intensity and versatily of his voice in The Jungle Book, Finding Dory, and Zootopia.  Hero or villain, TV or film, voice or full presence, Elba commands the attention of audiences, and his best is yet to come. END_OF_DOCUMENT_TOKEN_TO_BE_REPLACED 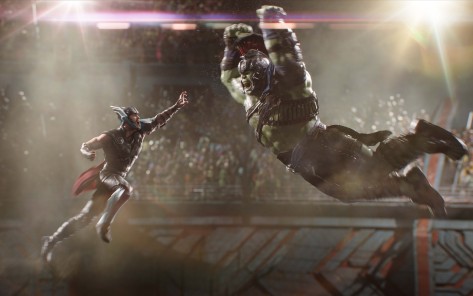 Disney and Marvel have officially announced that they will release on 4K Blu-ray and Blu-ray Taika Waititi’s blockbuster Thor: Ragnarok (2017), starring Chris Hemsworth, Tom Hiddleston, Cate Blanchett, Idris Elba, and Jeff Goldblum. The two releases will be available for purchase on March 6.

In Marvel Studios’ “Thor: Ragnarok,” Thor (Chris Hemsworth) is imprisoned on the other side of the universe without his mighty hammer and finds himself in a race against time to get back to Asgard to stop Ragnarok – the destruction of his home world and the end of Asgardian civilization – at the hands of an all-powerful new threat, the ruthless Hela (Cate Blanchett). But first he must survive a deadly gladiatorial contest that pits him against his former ally and fellow Avenger – the Incredible Hulk (Mark Ruffalo) – and grapple with his silver-tongued adopted brother Loki (Tom Hiddleston), the fierce warrior Valkyrie (Tessa Thompson) and the eccentric Grandmaster (Jeff Goldblum). END_OF_DOCUMENT_TOKEN_TO_BE_REPLACED

After over a year of anticipation, everyone finally got to see the first full trailer for Avengers: Infinity War, and it certainly didn’t disappoint.  Now is the time to scrutinize every frame for hidden meaning!  As you scroll down, you’ll see the Spider-Armor from Spider-Man: Homecoming, the cosmic cube Loki nicked in a blink-if-you-missed-it moment from Thor: Ragnarok, and Peter Quill with a mustache!  STACHE LORD!!!  Clearly Black Panther is going to be the perfect lead-in film for Infinity War, as it looks like a lot of the battle for Earth is going to take place in Wakanda.  Poor Vision is going to lose that forehead decoration, and SOMEBODY please get bearded Cap a shield!  I can’t wait! END_OF_DOCUMENT_TOKEN_TO_BE_REPLACED