Before The Washington Post and Watergate brought the Nixon administration down, they faced an issue just as daunting when, in 1971, they found themselves in possession of thousands of classified documents on the Vietnam War.  If the name Ben Bradlee sounds familiar to you, its because Jason Robards won an Oscar for playing the Post’s editor in the classic All the President’s Men.  Stepping into his shoes would be daunting, but if you’re going to have an actor do it, you want Tom Hanks.  He’ll be teaming with director Steven Spielberg for the fifth time, and while I’ve had my issues with Spielberg in the last 15 years, none of his collaborations with Hanks have ever been less than stellar.  If that weren’t enough, Meryl Streep will be playing the Post’s owner Katharine Graham.  In a time where the media has never been more important as the nation’s Fourth Estate, this film and the issues it will examine feel worthy of bringing together arguably the greatest actor, actress, and director of our age.  The Post will open December 22, 2017.  For the official synopsis, read below. 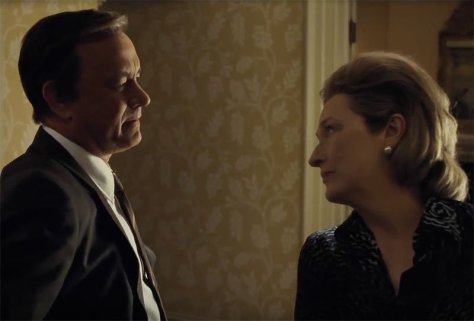 The Post will follow the 1971 scandal after the decision of The Washington Post editor Ben Bradlee (Hanks) and publisher Katharine Graham (Streep) to publish The Pentagon Papers. Written and leaked by military analyst Daniel Ellsberg, the Pentagon Papers established that the Johnson Administration had lied to the public and congress about US military involvement in the Vietnam War, and revealed that the Nixon administration had secretly escalated the war. The Nixon administration tried to stop The Post from publishing them, and Assistant U.S. Attorney General William Rehnquist took the case to the Supreme Court, which ruled in favor of the paper. The late Jason Robards won a 1974 Best Supporting Actor Oscar portraying a Watergate-era Bradlee in All the President’s Men. The Post will hit theaters in limited release on December 22, 2017, with a wide release on January 12, 2018.