Well, Alan Moore finally has a seriously legitimate beef when it comes to DC adapting his work.  Moore’s 1988 original graphic novel, The Killing Joke, is widely regarded as one of the three best Batman stories of all-time.  It has been incredibly influential in the development of the involved characters in the comics, influenced Tim Burton and Chris Nolan’s Batman films (Heath Ledger was given a copy of The Killing Joke when he signed on, and the interrogation scene in The Dark Knight has a lot of parallels with the graphic novel’s final showdown), and along with Frank Miller’s The Dark Knight Returns and Batman: Year One, ushered in the modern grim and gritty Batman that has been the standard take since.  When DC announced that its 24th animated feature would be its first R-Rated film, and would tackle The Killing Joke, fans initially got very excited.  Kevin Conroy and Mark Hamill would return to voice the iconic roles.  The first trailer seemed to pull directly from the graphic novel, and got fans even more excited.  Then, around Comic-Con, details started leaking about exactly how DC was padding the 48-page OGN into a 78 minute film.  Thus began the slow reveal of the worst animated project DC has ever released.  It fails the source material, it inflames concerns over aspects of the graphic novel, the script by Brian Azzarello is dull and poorly written when not cribbing for Moore, in short, this is an utter disaster.

The first 28 minutes were unnecessary.  They didn’t need to happen.  DC thought it had to give Batgirl more of a role in the story so it introduced an angsty Barbara Gordon kicking the crap out of a completely lecherous villain named-no lie-Paris Franz.  Franz objectifies Batgirl, becoming obsessed with her, while Barbara is obsessed with a relationship with Batman, a relationship that culminates in the two having sex on a roof after beating down Franz.  Ignoring the hand-wringing Barbara does with her gay BFF (who couldn’t be more stereotypical), Batgirl is at best in her early 20’s, maybe late teens and Batman is clearly in his mid to late 30’s.  Not only is it creepy, it borders on statutory rape.  Azzarello’s pointless prelude reinforces those who say the graphic novel is a misogynistic screed, and is just plain creepy.  Not in the horror way The Killing Joke should inspire, more in an “my weird Uncle Hank touched me in my special place” kind of way.

The animation is average, but Batman’s cowl looks absurd.  The ears are so far off to the side it looks like devil horns and is about three more inches from looking like the fake arrow through the head Steve Martin used to wear.  The voice work by Kevin Conroy as Batman and Mark Hamill as the Joker, should be great because they’re the two iconic voices of the character in animation and video games over the last 25 years, but they both voice this like it’s Batman: The Animated Series, and it really REALLY isn’t, so maybe the would have been better off recasting the roles for such a different story than either had previously handled. 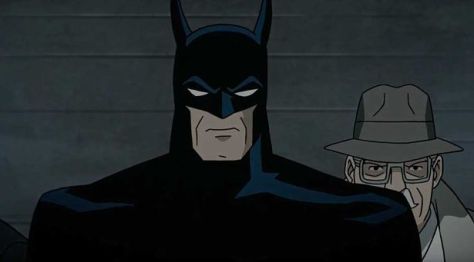 Once the source material is reached, Azzarello still felt the need to mess about with stuff. Batgirl who eventually overcomes her trauma to become Oracle (something they tacked on as a post-credit scene to mitigate leaving Babs paralyzed and helpless).  The Killing Joke is not a Batgirl story.  It has nothing to do with Batgirl.  It is a Batman vs. Joker story with the Gordons as collateral damage.  The Joker doesn’t shoot Barbara because he knows she’s Batgirl.  He shoots her because she opens the door.  That’s the random horror of the character that the OGN gets across so well.  If they were going to tack on that time, instead of strengthening the Batman/Batgirl relationship, they  should have focused on strengthening the bond between Jim and Barbara Gordon, as it’s they who will be fighting the horror in the second half and they who are most affected in the long-term by the events.

The circus and all the extremely creepy things done to Gordon and the horrifying pictures of Barabara that the Joker uses in his attempt to prove that any man is one bad day away from being him are graphic and deserve the R-Rating.  But instead of the intense horror and dread of a Joker completely unhinged (TKJ was also not far removed from the Joker’s murder of the second Robin, Jason Todd, so he was attacking Batman’s family in an unprecedented way.  But instead of feeling horror or intense dread, you’re bored silly by that point or just revulsed.

In the OGN, Alan Moore retold an old version of the origin for the Joker: the Red Hood into the Ace Chemicals vat and it’s become canon, but he also fleshed it out to try to make the Joker sympathetic pre-transformation.  It could have been an amazing counterpoint to the horror the Joker was wreaking in the film, but Azzarello’s writing was so poor, it just felt like another thing preventing us from getting to the showdown

The only points I’m giving this film are for the final showdown between Batman and Joker. This was done pretty faithfully to the OGN, and I have always loved the concept that the Joker can sense in Bruce that he had a bad day once and it drove him as mad as falling in the vat made him.  The iconic closing laugh is disturbing (seeing Batman laugh is disturbing enough), and the sudden stop to the laughter allows for the interpretation (fans have argued over the meaning over every panel of this book), but a popular theory is that in the fade to black, realizing that he would never stop, having tried his hardest, knowing that this was going to end in one of their deaths, that Batman crosses his line and killed the Joker in a dark panel.  It’s up to the reader’s interpretation.

The Killing Joke is a controversial piece of fiction, but you cannot deny the impact it’s had on nearly 30 years of Batman stories.  I don’t know why they just didn’t make this one 45-50 minutes and not stretch it past the source material period.  The Dark Knight Returns adaptation was rough, but it essentially captured Miller’s work.  This is not The Killing Joke, and DC continues to submit fail after fail after fail to its increasingly hostile fans.  With Jared Leto’s live-action Joker in Suicide Squad being the worst part of the movie, this double-header has to be the worst combination of entertainment for Joker fans.  Pop in Batman or The Dark Knight and let Nicholson and Ledger show you how it should be done, and leave this creepy piece of garbage on the shelf.
1.25/10