Here’s an amusing side road to take if, instead of reading this obviously stellar column, you’d rather let a debate between your friends dissolve into instead madness and chao……and your hands are already all up.  You all disappoint me sometimes.  Ok, is Tim Burton’s The Nightmare Before Christmas a Christmas movie about Halloween or is it a Halloween movie about Christmas?  All right?  I can see cutlery has already made its way into the home office debate so I’m going to slink out the back and return when the screaming becomes less of a physical presence.
ELAPSED TIME BREAK (9 hours 12 minutes 17 seconds). 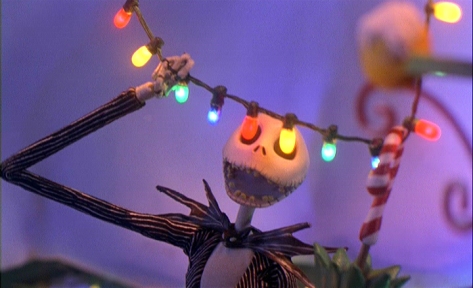 Well, it looks like the transplant patients have been given thumbs-up for matches across the board (It’s a Christmassy…Halloweeny. ..Holiday miracle!), so back to discussing a film many grown people have inappropriate levels of passion regarding.  Granted, I’m not mocking you as I own a Jack Skellington baseball jersey (oh, please, you’re judging me? when you own that -insert name of collectible that immediately sprang into your mine – in TWO COLORS?), but the fervor regarding NBC is matched by few films in cinema history in that it was both nearly entirely years after the film left theaters and driven by age groups that marketers didn’t even consider marketing the film to (which is probably why it was a rather large box office bomb).  However, now Jack Skellington is probably the most iconic character in the Disney stable (snuck in through the back door though he was) introduced in the last 30-odd years.

I love every minute of this insane holiday collision, but my favorite scene, and my favorite of the film’s madly captivating songs is “What’s This?”.  I love the concept that every holiday has a land of lore attached to its survival all coming together at an incredibly unsubtle nexus of holiday tree/doors.  Jack tumbles through the Christmas Town portal and is soon having a completely normal western civilization psychotic break with the importance of life vs. life when ensconced in the middle of an explosion of streamers, bells and bedazzled faux reality. (38 minute break while Dave searches iTunes for the song, before recalling that he does have it somewhere followed by 57 minute beak in which he is overwhelmed by the number of renditions he has of it and the ease and evil of the instant Playlist function.)

What?   Seem to have blacked out there and good merciful heavens, who gift wrapped the pug?  Clearly things must be gotten back under hand here at KT HQ but go pop in a copy of NBC and enjoy it non-stop between now and….whatever holiday you feel it best captures.

6 thoughts on “My Favorite Scene: Tim Burton’s The Nightmare Before Christmas (1993) “What’s This?””