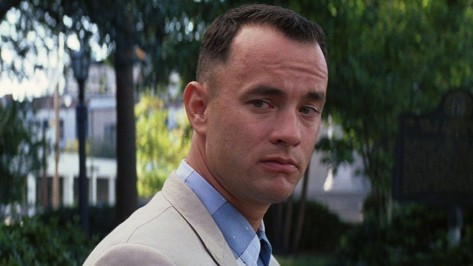 Latest vs. Greatest looks at directors, actors, actresses, screenwriters and composers to assess the state of their career as it stands.  We’ll look back at the latest 10 movies the artist has done, rate them and then average them out to see where they stand today.  We’ll also rank their 10 greatest movies and give them the same treatment to compare what they have been doing to their very best work.  (A quick side-note: if an artist is/has been a regular on a TV show we’ll also grade the seasons individually; artists need 10 projects to qualify).

Tom Hanks is the most famous actor in America, if not the world.  In a career entering its fourth decade, Hanks has already established a body of work of legendary quality.  He has created some of the most memorable characters in film history.  He has participated in cinema’s most famous scenes.  He’s won multiple Oscars and, were it not for the Academy’s weirdness about giving “too many” he’d have several more.  He is equally deft in comedy or drama.   He’s directed featured films.  He’s been the driving force behind three of the greatest mini-series to ever appear on television.  He’s one of the most powerful forces in the industry, but I’ve never heard anyone say a bad word about him (and in entertainment that’s quite an accomplishment in itself).  He is, quite probably, the best actor of our generation….and he started it all by dressing in drag on a sitcom. END_OF_DOCUMENT_TOKEN_TO_BE_REPLACED

Casual viewers might believe the 2014 Sochi Winter Olympics to begin tomorrow.  Officially, yes, you are correct.  NBC will begin broadcasting the Opening Ceremony at 7:30 p.m. tomorrow night.  COVERAGE begins tonight from 8-11 on said NBC.  This is the post where we have a little chat about Dave and how he is during an Olympics.

I recognize the term “Olympic Fever”; I do.  Olympic Fever is what some casually interested people have on weekends or for gold medal games or who know enough to talk about it at the office.  What I have is OLYMPIC HEMORRHAGIC FEVER or the “Ebola” strain of the disease.  NBC is airing three hours of qualifying in snowboarding, figure skating (which I will watch even though it, like gymnastics, has disqualified itself from being considered as a sport due to a scoring system that doesn’t even approach sense), snowboarding, and something else I CANNOT EVEN REMEMBER BUT ALL CAPS ARE WARRANTED BECAUSE THIS IS THE OLYMPICS!!!!

I know the rules to luge.  I have owned a Sochi hoodie for MONTHS.  They’ve awarded the Olympics through 2020 and I am prepping for each of them.  Rio in 2016?  Oh I’m thinking about it.  Why is this relevant in what is primarily an entertainment blog?  Well, here’s the thing, time stabbers.  I’m going to be watching five to twelve hours of coverage a day for the next 18 days.  Conservatively.  Thanks to my handy Chromebook, I may be able to multitask and write on commercial breaks or when the abomination that is ice dancing fouls the screen.  Normally I post 4 or 5 times a day Monday through Friday and at least 1-2 times on weekends.  If that pace continues, it will only be because I’m turning this into a forum to urge Bob Costas to run for President of the World.

In all seriousness, in a world where I am cynical and skeptical about pretty much everything that isn’t a LEGO or my nephew….yeah I need to make a LEGO version of my nephew, someone take that down on the idea pad…the Olympics matter to me.  It matters to me that in this stupid, deeply screwed up world, we all get together and play games together for two weeks every two years.  I think it’s one of the best things we do.  I think it matters.  I’m not blind to its flaws.  I know so much on the Olympics, I have written small books on it to break teachers who asked for a simple paper (sorry, Jill).  Heroic, human things still happen at the Olympics and if I don’t recharge by bathing in sparkly Olympic awesome, I will become Sauron in a fortnight.  Best case scenario.

The posting pace may slow.  I may decide to do posts about the games.  I don’t know.  I’m just saying, I’m on day three of writing a piece about Tom Hanks and you’re not getting that kind of free effort out of me during the Olympics.  Summon the heroes and let the games begin (tomorrow)!  Let’s all get together, thow ourselves down frozen things as a united world community and be better for it!  I’ve got a fever….and the only cure….is more SOCHI!

Courtesy  of CloneWarsFanJedi comes this fantastic top 10 video of the best lightsaber duels from the Clone Wars animated series.  A lot of fans might dismiss the series out of hand because it is animated and, admittedly, a lot of the the first season they were finding their legs, but this grew into a seriously worthy addition to the canon.  One of the best things about the show as that lightsaber duels could go completely off the wall because they weren’t constricted by anything.  These are Jedi and Sith in their prime fighting each other and some truly epic duels resulted.  The one in season five between Sidious, Maul and Savage is one of my favorite from anything Star Wars.  Enjoy this (it’s a lunchtime viewing at 24 minutes) and look forward to the finale of Clone Wars and the upcoming Star Wars: Rebels from the same team.

Lost and The Hobbit star Evangeline Lilly will be joining the cast of Edgar Wright’s Ant-Man.  Lilly will play the daughter of Ant-Man I Hank Pym (Michael Douglas) and the love interest of Ant-Man II Scott Lang (Paul Rudd).  Michael Pena has also been confirmed for the film. END_OF_DOCUMENT_TOKEN_TO_BE_REPLACED