This turns out nicely since Tom Cruise is the next actor we’ll be looking at in the Latest vs. Greatest column, so I absolutely planned that the trailer for his next movie would release today.  I control events to that level of serendipity.Previously entitled “All You Need is Kill” (no), Edge of Tomorrow stars Tom Cruise, Emily Blunt and Bill Paxton in a…well, it’s a bit tough to summarize so I’ll be extraoridnarily lazy and let the official synopsis stand:

Lt. Col. Bill Cage (Tom Cruise) is an officer who has never seen a day of combat when he is unceremoniously dropped into what amounts to little more than a suicide mission. Killed within minutes, Cage now finds himself inexplicably thrown into a time loop—forcing him to live out the same brutal combat over and over, fighting and dying again…and again.

But with each battle, Cage becomes able to engage the adversaries with increasing skill, alongside Special Forces warrior Rita Vrataski (Emily Blunt). And, as Cage and Rita take the fight to the aliens, each repeated encounter gets them one step closer to defeating the enemy.

So it’s like the Source Code Looper.  I guess.  Cruise has a pretty decent track record and very rarely does he bomb (Rock of Ages, I’m looking at you).  Check out the trailer and Edge of Tomorrow will open in theaters June 6, 2014. 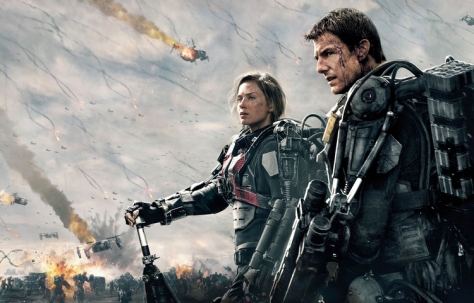